ParseHub can be used in combination with textual analysis tools to collect complex and valuable data from social media sites like twitter.com. In my article about this year's phenomenally popular Presidential Race, I used a sentiment analysis tool from text-processing.com to mine the opinions of 27,000 tweets. You can use this very same process to find out the opinions of your customers. Software companies and consulting firms will charge you thousands of dollars per month to do exactly this.

In this guide I will show you every step in my process of combining ParseHub with a sentiment analysis tool, so that you can start mining the sentiment of responses on social media too.

I used Python to analyze my data. Check out our tutorial on data analysis using iPython notebooks here. Feel free to follow along with whatever your preferred data analysis language is, and let us know about your experience, in the comments below or in an email!

Collecting tweets from snapbird.org with ParseHub

The website I collected the tweets from, snapbird.org, saves just under 3000 latest tweets from twitter accounts whereas twitter.com only lets you see the last 800 or so. Here's how you can also use ParseHub to scrape all 3000 tweets from a given twitter account.

Open Snapbird.org and go to the log in page 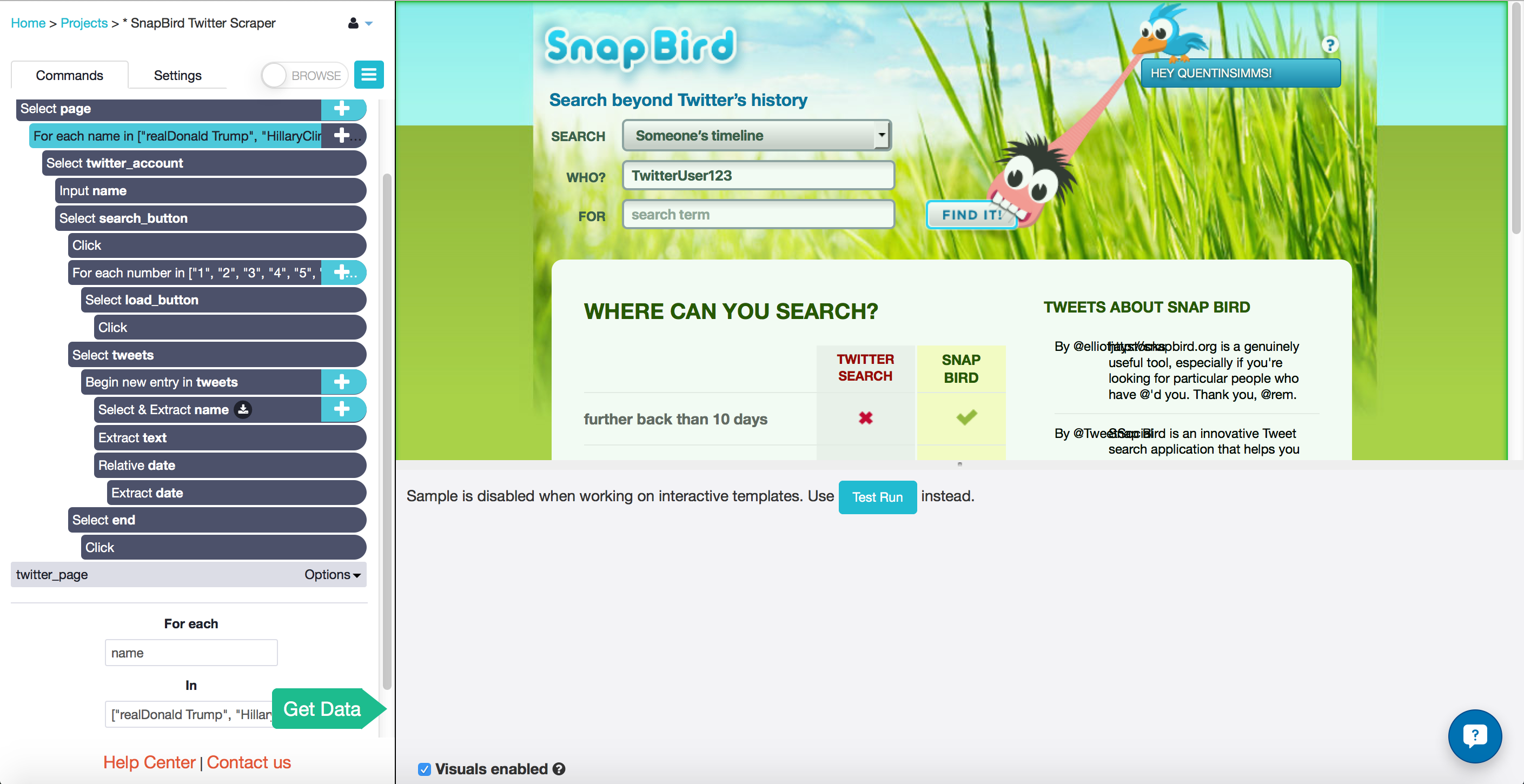 Extracting data from the tweets 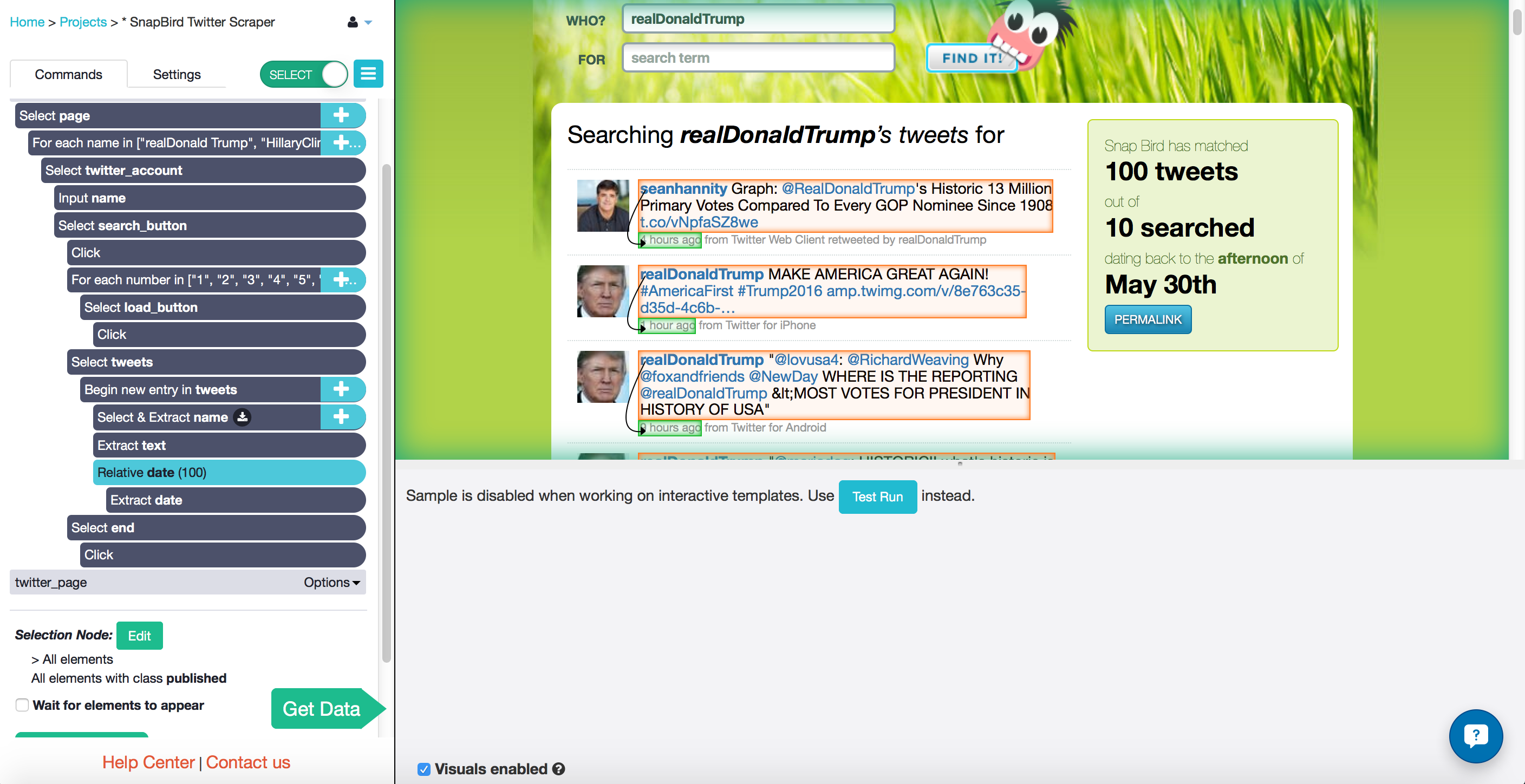 After that, I was ready to gather my data! I clicked the ParseHub "Get Data" button, clicked "Run" and waited for the data to collect. Since this was a huge haul of data, I left my project to run overnight.

Importing the JSON data from ParseHub

Before doing anything else, I checked over the CSV that ParseHub gave me just to make sure the information looked the way I wanted it to. I saved the JSON from ParseHub to my Desktop, ready to import into my iPython notebook.

The first thing I did was import all of the libraries I would be needing for my analysis.

Then I imported the JSON file from my desktop using the pandas library read_json. You can see the DataFrame that I got in the picture above.

Sending the text data to the sentiment analysis tool

Once I signed up for text-processing.com, I got my own X-Mashape-Key from their Mashape documentation. I needed to send this, along with the text that I want analyzed, as an HTTP POST.

I set up an empty pandas DataFrame called response which would fill with the response I got from each HTTP POST.

I looped, one by one, through each tweet in my massive DataFrame, and sent it to the textual analysis URL. Each response I got was a JSON with two elements, the sentiment detected in the tweet (either 'neg', 'neutral', or 'positive') and the likelihood that it had each one of those sentiments (between 0 and 1).

NOTE While my loop was still running, I received a 503 Service Unavailable error which had crashed my code. It seems as though my internet had dropped momentarily and my program had crashed when it was no longer able to reach the server. I was worried about losing my data at first, but then realized that the table response had saved the response of every loop that happened before the crash. So if you see this problem, there is no need to panic. You didn't lose any of your data, you just had to run the code again, remembering to start
up the loop from where it left off.

After the loop completed, I started a new code cell to turn response into a pandas series.

With to_json, I was able to turn the series into a DataFrame with two columns, one with the sentiment "label" and one with the "probabilities".

I read the column "probabilities" to turn it into three separate columns, "neg", "neutral", and "positive".

I joined these columns with the original DataFrame, tweets.

I would recommend saving your data as soon as possible, so that you don't have to wait for a loop to send all those HTTP POSTS each time you close Jupyter Notebooks. 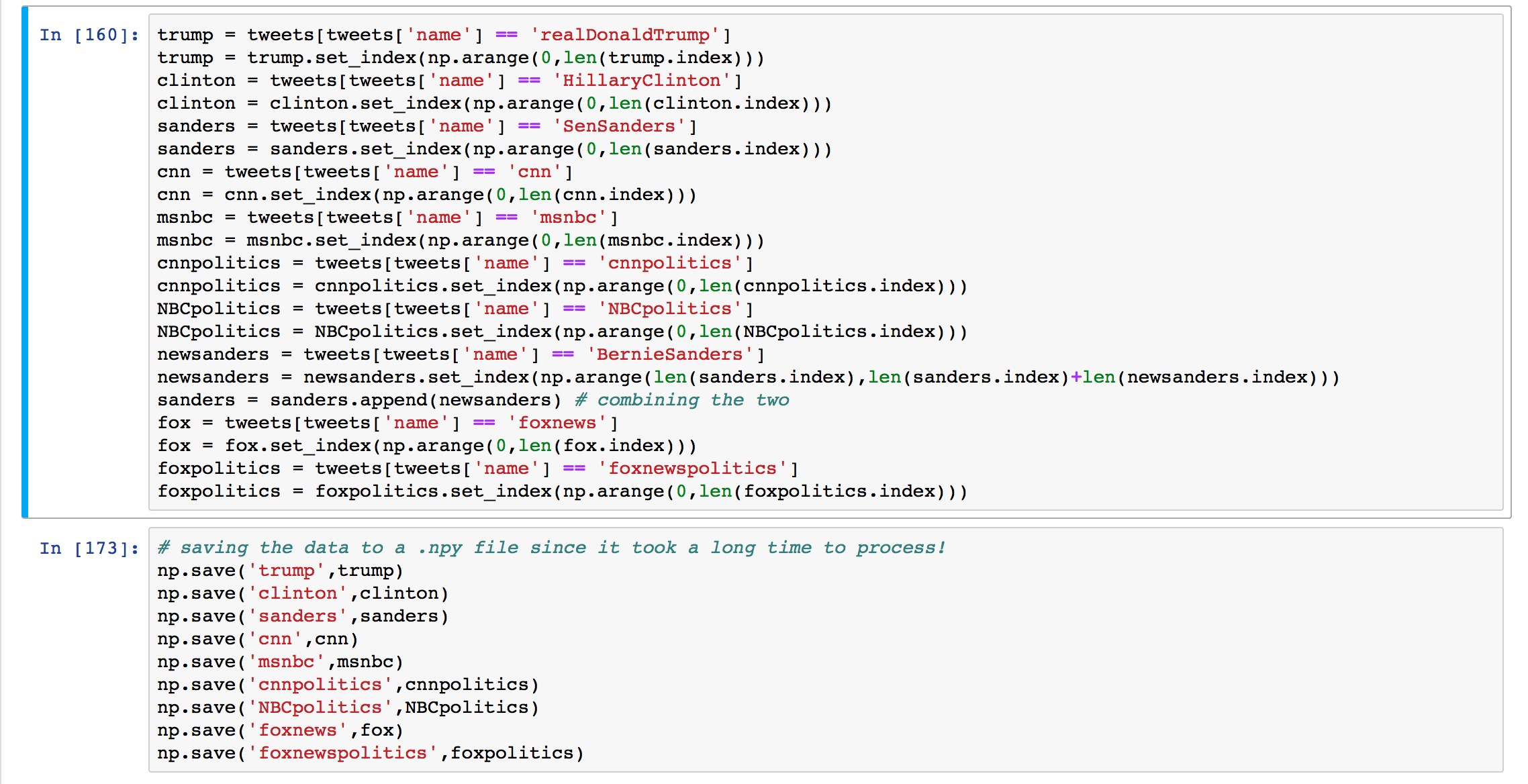 Load the files you just saved using numpy's load function. You will have to add the columns manually. You will be able to start
your analysis from here! 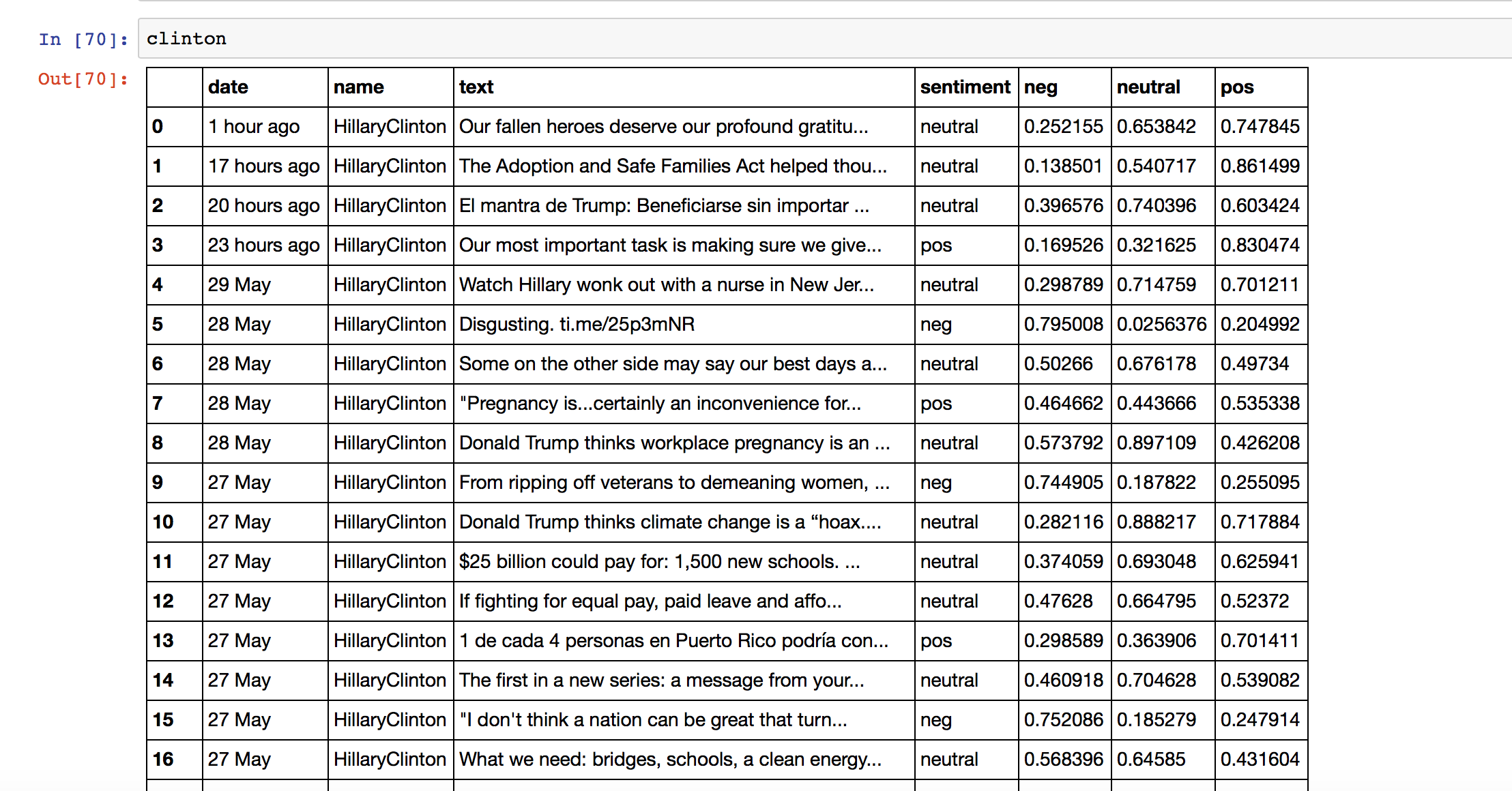 In the next guide I will go over my entire Python project I made for my
presidential campaign article, showing you some of the different ways that you could analyze the tweets that you scrape from the web. I will show you how I:

Forget about the weather, "So, how about that Trump guy?" has become the preferred way of starting smalltalk for people around the globe. In my last guide, I showed you how

Entrepreneurs are dreamers and explorers, constantly looking for new opportunities. If you are in the business of creating, it is only natural for you to look outside of your comfort zone and wonder